Elements of the Sea

We had a great opportunity to do a concrete trough sink for a Dental Office up in Stillwater, MN. This project was especially fun because of all the different and innovative elements that the sink encompassed.

The office staff wanted to play up the area for rinsing and washing with a nature and sea theme. It was important for them to create a fun atmosphere while still holding true to who they are. One element that made them unique was the tagline the company has utlized for years, "Be Happy With Your Smile."

The project below shows the different sea and natural elements that tie in with the tagline.
Notice the natural and sea details: 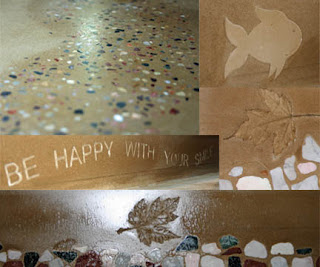 The overall look of the trough sink turned out great. The pebbles of the sink showed a natural flow from the spout to the drain which adds a certain dimension to the natural sink. The fish and tagline were sandblasted in to "liven" up the piece giving it a playful feel, and lastly the rock on the front really gives it the natural feeling. Plus your eyes are drawn to that feature and all you want to do is touch it! Below is the finished project. 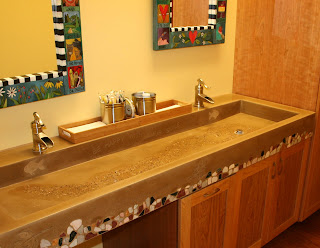 Posted by Concrete Arts at 11:56 AM No comments:

Borders add dimension and depth to a decorative concrete piece and vary significantly. You can go from a basic saw cuts to intriquet details on both patterned stamped concreta and seamless textures. To make the border stand out even more, many times people will stain the outer saw cut a different color or even multiple colors. Again, it depends on your design aesthetic and what you envision your decorative concrete patio, sidewalk, driveway, interior, etc to look. Below are a few of the many options that are possible.
Basic Saw Cut 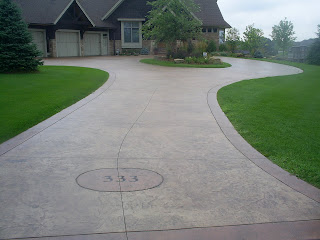 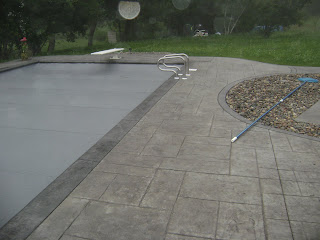 The last post showed the many different options of decorative stamped concrete focusing mainly on Seamless textures. Today, I'll show you the patterns available. There are many more pattenrs than the few I am showing you now. The most popular seem to the the cobblestone, brick, and ashlar slate.

Remember, you can customize your stamped pattern to include many different options of stained and integral colors as well as combining different stamped patterns together which we will focus on next post. Below are a few options for the patterned decorative stamped concrete. 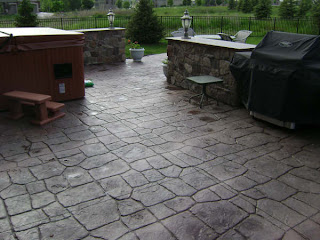 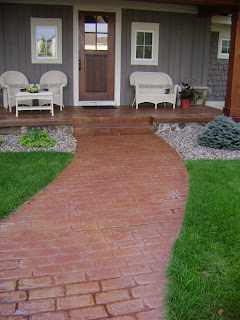 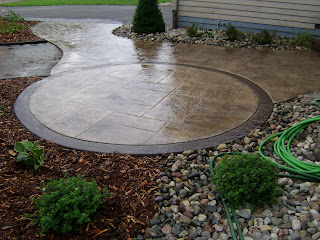 Posted by Concrete Arts at 1:04 PM No comments:

As we've been exploring the different options with decorative stamped concrete, I think its important to realize the main options that you can choose from. Many times stamped concrete looks are split up into 3 categories.

Because there are so many different options and combinations, today I'll focus and show just Seamless textures. Below is a close up and a broad look at a seamless texture. As you can see there are no defining stamped patterns. 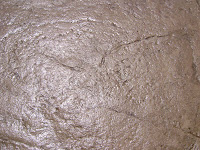 Seamless textures also allows for creativity with dyes and stains. You can be subtle with the stain or dye you use or you can get creative with your design like the pictures below. Either way, its important to remember and realize decorative stamping and staining can reflect your personality and how you want to portray your home. 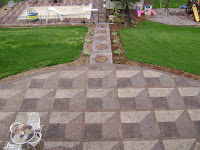 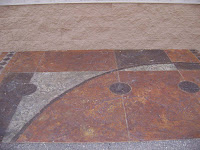 Posted by Concrete Arts at 1:04 PM No comments:

I came across this article a couple weeks ago when digging through some old files and wanted to share it. This article is a little dated (2003.) Okay so its a lot dated. Some informatio has changed as far as R&D and the concrete economy, but the article "character" itself still stands strong.

Tom Graf says he eats and breathes decorative concrete. If that's the case, then his company, Concrete Arts by Graf Architectural Concrete, is the sustenance of his life. Concrete Arts, now in 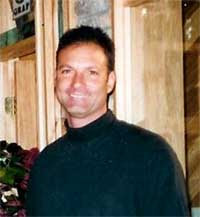 its ninth year in Hudson, Wisconsin, has had a really successful run to date. Now Graf is taking that run a step further by expanding heavily into other markets, including decorative concrete, grinding and specialty work.

"Decorative isn't as nichy as it once was," explains Graf of the transition. "I've been following the market closely, and (I think) polymers are the future." Graf says he wanted to take it to another level, thus the move to decorative, which has included a lot of personal time and money spent on research and development (R&D).

That he's even thinking about R&D at all might be due in part to his educational background. Graf inherited the concrete trade from his father, who was a masonry and concrete contractor. But in college, Graf studied advertising and marketing. His roots, however, beckoned, and he soon turned away from advertising to become a full-service contractor. Eventually he expanded, specializing in decorative work.

"When we first started, I just wanted to bridge the gap in the seasons," he says of adding decorative to his repertoire. "We pride ourselves in keeping our employees busy, and they stay busy year-round."

Graf leads a team of employees that stand behind a great reputation and shared business ethic. "My employees know and understand my passion for what we're doing," Graf explains
It's clear he prides himself in his reputation. "A customer's a customer," Graf says. "I'm not willing to sacrifice my reputation for financial gains. I'm not very money-driven, plus, I don't have very thick skin."

Being surrounded by a motivated group of people who want to work has also inspired him to keep the new ideas flowing. One idea, his self-proclaimed "opus," is his creative showroom.
The showroom includes the company parking lot, which features 30,000 square feet of decorative concrete and a topography of the St. Croix river, complete with a soon-to-be-added water feature. This showroom has proven to be a tremendous selling tool for Graf. "We did patterns, textures and stains in various styles. The parking lot is all exterior stains and colors," he says with pride. He also shows a deeper understanding of his customers, providing them with ways to visualize their ideal projects in a realistic setting.

The showroom also features a 20,000-foot interior space, and the entire center won the Wisconsin Ready-Mix Commercial Project of the Year in 2002. (He also received it again in 2004)

This showroom, coupled with his website (http://www.concretearts.com/), has helped Graf deal with the new breed of consumer – the Internet-educated consumer who researches where their money is going. Graf notes his customers are more educated about the decorative concrete process from the beginning. "They're more sophisticated and more astute to quality control," he adds.

In addition to his unorthodox showroom, Graf has another unique selling approach with customers – honesty. His approach includes educating his customers about decorative concrete maintenance, teaching them how to seal their concrete once a year in order to preserve its beauty it forever.

One of Graf's many other secrets of success is the fact that he's a realist. Although he admits the concrete market is great right now, he acknowledges that may not always be the case. In anticipation of the inevitable, Graf says he strives to pay down his debt quickly so that a sudden shift in the market won't have as much impact on his business.

But that's not to say he's a worrier. "Things have a way of evening themselves out," Graf laughs. "I just go with the flow."

Right now, Graf is focusing on keeping up quality control while growing the decorative side of his business. He's also researching and developing new diamonds and plates, as well as exploring grinding wet concrete. "Polishing is still in its infancy," he explains of his interest. "There's a big learning curve." (We currently do a lot of wet grinding now!)

Although Graf admits his company is doing well right now, he admits that there's always room for improvement, saying, "There's always something to learn in this business." Education is fundamentally important to Graf, and one of the many ways he learns is through his association involvement, whether as a speaker or attendee. He says the best thing about the associations is the fact that he's been able to network with other contractors.

"It's an outlet to throw ideas around and share horror stories. I really enjoy it," says Graf.
Like most students who love to learn, Graf says might someday turn to teaching. And for someone who eats and breathes concrete, teaching's not a giant leap, just another logical stop in the life of a man who loves his work.

Posted by Concrete Arts at 1:37 PM No comments: